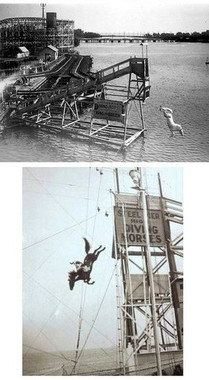 The most famous Atlantic City, NJ, Boardwalk act ran on the Steel Pier in the early 1900s. Several times a day, a horse and its scantily-clad female rider would leap from a 60-foot tower into a pool of water. This incredible and amazing story was celebrated in the 1991 movie "Wild Hearts Can't Be Broken." This fabulous Sterling silver pin is 4" long x 1-1/4" wide and weighs 23 grams. Comes in our gift box as always!

We were unable to uncover any information about injuries to any of the high diving horses that were in the world famous boardwalk show.  The only casualties of any kind associated with this acts was an occasional injury to a rider once or twice a year, usually a broken bone, the result of swimming around in a small pool with four thrashing hoofs attached to an animal much larger than they or, sustained while climbing out of the pool after the high dive.  Back in 1931, a rider named Sonora Carver lost her sight doing a dive, the impact with the water damaged her eyes.  She had been diving for seven years and while rding her horse “Red Lips”, she entered the water with her eyes opened. Amazingly, Ms. Carver continued performing as a diver until 1942 a total of 18 years, 11 years blind. She later wrote a book about her experiences riding the diving horses at the Steel Pier and one important note is that she lived to be 99 years old. The book was made into a movie  “The sad, and happy, end of the horses” – sold at auction for any intended use, but the final two diving horses, Garmal and Shiloh, were sold to an animal protection fund. The Fund arranged a quiet retirement for them in pleasant surrounding and with caring responsible owners. Contrary to Animal Rights Activist’s claims, the horses associated with the show were never injured, never mistreated in any way and brought nothing but happiness and excitement to those fans in attendance to see America’s Number One Boardwalk Attraction.

This product hasn't received any reviews yet. Be the first to review this product!